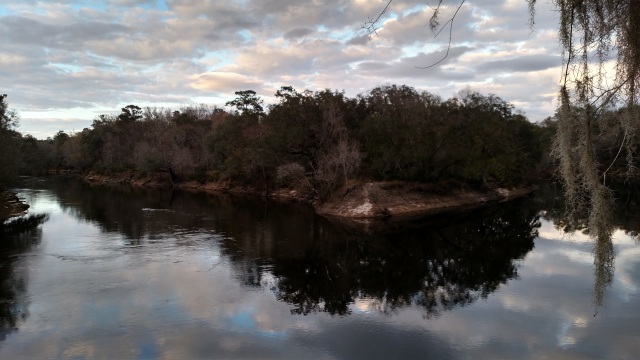 As I photographed this view of the merging rivers, January 14, 2017, I could hear the drills restart, just out of sight on the Suwanee River, on the right, to the North.

The fracked gas pipeline, known as the Sabal Trail Pipeline, has already been tunneled beneath the Withlacoochee River, which is on the left in this photo.

Drilling was held up for ONLY most of one day by Water Protectors in a peaceful direct action.

It is interesting to note that the number of law enforcement vehicles, which approached in a practiced formation, seemed to outnumber the Protectors.  The intimidating gesture was meant to instill hopelessness.  If there were four officers per vehicle, the Protectors were greatly outnumbered.  Though law enforcement and security did have visible sidearms they did not brandish  rifles or assault weapons.  They mostly stayed out of sight in the vehicles, only getting out in small groups, and kept weapons discreet.  However, the threat was there.

There were no overt confrontations that I observed, nor any arrests, though arrests have been made in previous encounters.  Procedural discrepancies and irregularities are being researched by Protectors hoping to find some way to stay the digging.

Bedrock here is porous karst and the whole area is subject to sinkholes.  The gorgeous interconnected underground rivers, caves, aquifer, glorious springs greeting the sunlight, and water systems is threatened in its entirety by any damage anywhere.

100% of all pipelines leak, sooner or later.

Update on #StopSabalTrail lockdown this morning: 8 have been confirmed arrested. Join them for a rally 8am tomorrow at the Suwannee County courthouse.