.
October sun is shining over the St. Mary’s River.  This is as close as I can get.

October Sun Over The St. Mary’s River .. if I could just get to it ⓒBearspawprint2014 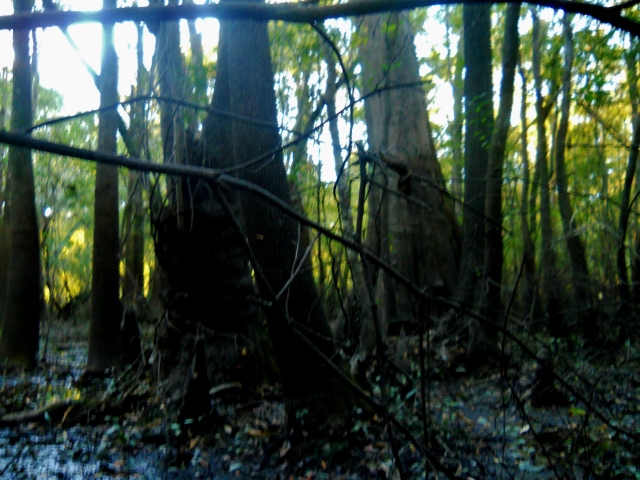 .
Looking down over the River Swamp.

There was a power outage today with a surge, just before. The surge rang all the land-line telephones, then all went dark, including my monitor. Oops. I was trying to download some pictures of the rain!
.
All was not lost, I retrieved my memory card and took  more photos. When the power was back on, I found that the original small batch of photos was intact.
.
Usually both of our dogs hide under my bed when it rains, especially if there is lightening. But only if I am in the same room. If I am elsewhere, they try to hide under my feet. This does not work, because I stand on my feet. It also jiggles my camera.  Even so, a few photos are not too bad.
.
Bear
ⓒ Bearspawprint 2014

I was standing close to the back of the water curve, between the two trees, pictured in the photo below, to take some of the “Rainy Day Walk” photos.

There was no light rain to keep the skeets away, yesterday evening, while I was snapping photos. With all of the high water, those little whiners are quite happy, so are the crawdads.  If I want the light to reflect across the water’s surface I have to wait until early evening.  Earlier in the day the light is not right, the water under the trees appears only as darkness.  I suspect that someone informed the mosquitoes ahead of time.

I saw the wake of something BIG swim away, but I didn’t see what it was.

Whenever the floods go down, the land is  different.  15 years ago there was a deep ravine and a high sandy dry place beside it, in front of where the swing is pictured, that was  the shortest route to walk to a sandy swimming beach with nice willows for sitting in to picnic.   It was about 1/4 mile to the river.   That changed, and changes again every year.   By observing the still appearing surface you cannot tell that some places are 20 ft., and more, deep, and some are only 2 ft.   The current is also not apparent on the placid surface, but follows the unknown, changing contours of the hidden muddy ground .

You really have look for them …

“It is seldom noted anywhere in fact, be it in textbooks or on the internet, that Hitler studied Americas Indian policy, and used it as a model for what he termed the final solution.

“He wasnt the only one either. Its not explicitly mentioned in the film, but its well known that members of the National Party government in South Africa studied the American approach before they introduced the system of racial apartheid, which lasted from 1948 to 1994. Other fascist regimes, for instance, in South and Central America, studied the same policy.

“Noted even less frequently, Canadas Aboriginal policy was also closely examined for its psychological properties. America always took the more wide-open approach, for example, by decimating the Buffalo to get rid of a primary food source, by introducing pox blankets, and by giving $1 rewards to settlers in return for scalps of Indigenous Men, women, and children, among many, many other horrendous acts. Canada, on the other hand, was more bureaucratic about it. They used what I like to call the gentlemans touch, because instead of extinguishment, Canada sought to remove the Indian from the Man and the Women and the Child, through a long-term, and very specific program of internal breakdown and replacement call it assimilation. America had its own assimilation program, but Canada was far more technical about it.

“Perhaps these points would have been more closely examined in American Holocaust if the film had been completed. The films director, Joanelle Romero, says shes been turned down from all sources of funding since she began putting it together in 1995.

“Perhaps its just not good business to invest in something that tells so much truth? In any event, Romero produced a shortened, 29-minute version of the film in 2001, with the hope of encouraging new funders so she could complete American Holocaust. Eight years on, Romero is still looking for funds.

“American Holocaust may never become the 90-minute documentary Romero hoped to create, to help expose the most substantial act of genocide that the world has ever seen one that continues even as you read these words.”        om swastik