Sometimes I think the quasi-offical Chinese response is that self-immolation saves the colonial government from the bother of prosecuting and torturing   the Tibetans, themselves..

Two Tibetan men self-immolated Saturday in separate protests against Chinese rule in Tibet, one of whom was a monk who called for the return of exiled spiritual leaders to the region, Tibetan sources said. 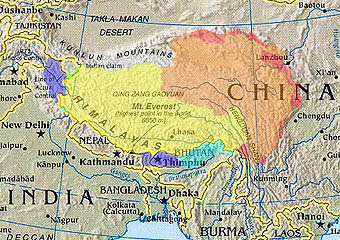 The new burnings were the 93rd and 94th Tibetan self-immolations since February 2009, when the fiery protests began.

They said the young monk had shouted out slogans while he sat with his hands folded in prayer after setting himself alight.

“He called for the long life of the [Tibetan spiritual leader in exile] Dalai Lama, and his return to Tibet,” said Kanyak Tsering and Lobsang Yeshi of the Kirti Monastery in Dharamsala, citing a source inside Tibet.

“He also called for the return of Kirti Kyabgon Rinpoche [the exiled Head Lama of the Kirti Monastery in Ngaba],” they said.

The sources said Kunchok Phelgyal had also voiced hope for a “reunion of Tibetans both inside and outside of Tibet.”

“As he was being burnt in protest, the monks of the [Sumdo] Monastery gathered around his burning body and prayed,” they said.

“Thereafter, his body was moved to his room inside the monastery and several hundred monks conducted prayers for him.”

The young Kunchok Phelgyal had been studying Buddhist dialectics at the Taktsang Lhamo Kirti Monastery since 2010 as a visiting monk from the Sumdo Monastery.

“He is the son of Kunchok Kyab (father) and Dolma Tso (mother) of the Gonda Dewa nomadic village under Dringwa township, Dzoege county in Ngaba,” Kanyag Tsering and Lobsang Yeshi said.

“He has nine family members including his parents.”

Also on Saturday, layman Pema Dorjee self-immolated in front of the Shitsang Monastery in Kanlho’s Luchu (Luqu) county, a source inside of Tibet told RFA’s Tibetan Service, speaking on condition of anonymity.

“Pema Dorjee, who is just 23, set himself on fire and protested against the Chinese occupation of Tibet,” said the source.

“This happened around 4:35 p.m. [Saturay], right in front of the door to Shitsang Monastery in Luchu county in Gansu. He was reported dead following his act of self-immolation.”

The source said that Pema Dorjee had torched himself as several Tibetans were gathering at the monastery for Gaden Ngacho, a special lamp offering prayer session.

The layman was from Chokor village, located around 30 kilometers (19 miles) from Shitsang Monastery.

The two new burnings drew immediate condemnation from the London-based Free Tibet, with director Stephanie Brigden saying she had “grave concerns” for the welfare of Tibetans living in the townships where Saturday’s protests occurred.

“China has announced collective punishments it intends to mete out on communities where protests take place, and Free Tibet has documented, time and again, China’s flagrant violations of human rights, including the use of lethal force, during the uprising in Tibet,” she said in a statement.  “Tibetans continue to call for freedom, despite the cost. It is beyond time for the world to take decisive action for Tibet.”

The protests follow a statement earlier this week by Maria Otero, the U.S. State Department’s Special Coordinator for Tibetan Issues, who said Washington was “deeply concerned and saddened” by the increasing frequency of Tibetan self-immolations.

“Chinese authorities have responded to these tragic incidents with measures that tighten already strict controls on freedoms of religion, expression, assembly and association of Tibetans,” she said.

“Official rhetoric that denigrates the Tibetan language, the Dalai Lama, and those who have self-immolated has further exacerbated tensions.”

Otero said that Beijing must address policies causing discontent in Tibetan areas, including controls on Tibetan Buddhist religious practice, education practices that undermine the Tibetan language, and the surveillance, arbitrary detention and disappearances of Tibetans.

Since late October, officials have responded to the burning protests by punishing the families and communities of protestors, characterizing immolations as criminal offenses, arresting those associated with the self-immolators, and deploying paramilitary forces and restricting communications and travel in areas where the protests have occurred.