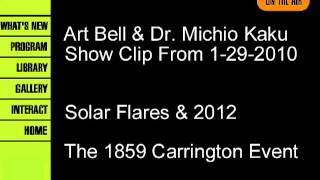 Effects of an 1859 Carrington Event today
Jun 8, 2011 … Just how bad could a
Carrington Event be for our electrical and electronic
infrastructure,
worst case scenario?http://en.wikipedia.org/wiki/
…

A Super Solar Flare – NASA Science
Sep 20, 2011 … “In the 160-year record of
geomagnetic storms, the Carrington event is the
biggest.” It’s
possible to delve back even farther in time by examining …

Solar storm of 1859 – The Carrington Event…
[link to en.wikipedia.org] The Carrington
event of 1859 – the largest solar flare
ever recorded (short documentary
video on the event) …

The Carrington event of 1859 – the largest solar flare ever recorded.

Just before noon on September 1st 1859, the British astronomer Richard Carrington witnessed the largest solar flare ever recorded. The solar flare ejected a plasma cloud that traveled from the surface of the Sun for just over eighteen hours before finally reaching the Earth. As the dawn broke on September 1 1859, the skies all over planet Earth erupted in red, green, and purple lights so brilliant that newspapers could be read as if it were daylight.   Stunning northern lights pulsated at the tropical latitudes over Cuba, the Bahamas, and Jamaica.   Telegraph systems worldwide went haywire. Spark discharges shocked telegraph operators and set the telegraph paper on fire. Even when the telegraph operators disconnected the batteries powering the lines, electric currents in the wires still allowed messages to be transmitted.  A sun storm of this sort today could cause billions of dollars of damage to the Earth’s satellites and terrestrial power grids. And disrupt radio and cell phone communications.  In the 160-year recorded history of geomagnetic storms, the Carrington event is the biggest.

The Perfect Solar Storm & the Carrington

The Perfect Solar Storm and the Carrington Event – PREPARE for all POSSIBLITIES. As we see a massive Solar Storm today complete with HUGE X CLASS flares and CMEs errupting off the sun and already headed to earth – what can we expect? The Carrington event took 18 hours to reach Earth! Watch this History Channel doco and take notes!

The Perfect Solar Storm & the Carrington Event – PREPARE for all POSSIBLITIES!